Bridges are configurable-width flat sections of the world that you can toggle on and off. The width of the bridge can be changed.

They can be toggled using two different methods:

The signs can be both either above or below the bridge (Or on the side of the block), but they must be in the center. 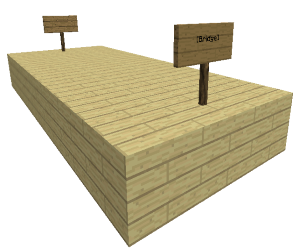 Bridges support redstone: just put a redstone current next to the sign. You may want to place signs under bridges so that they are not unsightly if you do use redstone.

Aside from the obvious use as a retractable bridge, some possibilities include: